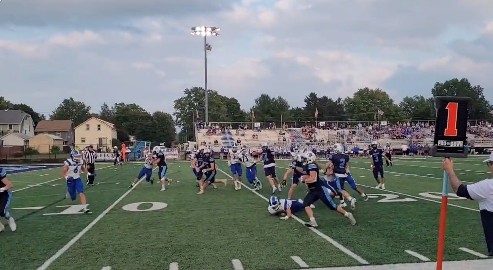 The Louisville Leopards high school football team have named a new head coach. Chris Kappas will take over the role from Troy Davis and look to improve on the Leopards 3-7 record from 2022. Kappas is no stranger to Stark County as he played college football at Mount Union and has been coaching in various roles for the last 10 years. Most recently, Kappas spent 3 seasons as the defensive coordinator at Austin Peay State, a Division IAA program. The hiring will be made official at the Board of Education meeting on January 9th. Louisville Athletic Director Terrie Horn was quoted in a statement:

Coach Kappas brings a wealth of football knowledge from the college level to our Louisville High School football program. His depth of knowledge on both sides of the ball will enhance the level of play and continue the excitement of Louisville football that is so well known throughout Stark County

Rick Crislip is a current board member for Louisville schools and a former football coach who is enthusiastic about the hire. He was quoted:

Finding a candidate of Chris ‘caliber is a once in a lifetime opportunity for Louisville. He is our guy.

We are fortunate to have Chris be the next leader of our football team. He is returning home to be with his family and will bring a hands-on approach as he transitions to his new position as a head coach. With the college-level experience coming to our high school football program, we welcome Mr. Chris Kappas as Louisville High School’s new head football coach.

Kappas comes to the Leopards with impressive accolades. His time at Austin Peay earned him American Football Coaches Association FCS Assistant Coach of the Year for the 2022 season. Kappas also played a big role in helping Austin Peay players set new team records for GPA for four straight semesters. While the expectations are great in Louisville, Kappas seems optimistic and excited about the challenge. In a statement, the new Louisville Leopards head coach was quoted:

I will bring fun and make football enjoyable, while bringing a level of expectation and hard work. I am demanding but fair. I will put the best players on the field.