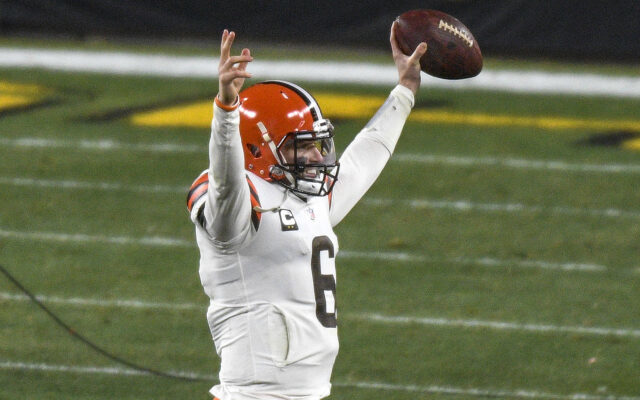 Cleveland Browns quarterback Baker Mayfield (6) celebrates as he walks off the field following a win over the Pittsburgh Steelers in an NFL wild-card playoff football game in Pittsburgh, Sunday, Jan. 10, 2021. (AP Photo/Don Wright)

No head coach, no pro bowl guard or cornerback, no starting defensive end, no practice, no problem for the Browns!

With head coach Kevin Stefanski forced to watch from home because he contracted Covid, Cleveland dominated the Steelers early, never gave up the lead, and held on for a stunning 48-37 victory in Pittsburgh.

It snapped a 17 game losing streak in the Steel City as the Browns won their first playoff game in 25 years after a week of turmoil and adversity never seen before in franchise history thanks to the coronavirus pandemic.

Cleveland led 28-0 after the first quarter thanks to 3 Steeler turnovers.

Baker Mayfield threw for 263 yards and 3 touchdowns without a turnover, while running backs Nick Chubb and Kareem Hunt combined for 206 yards of total offense and 3 td’s.

Sheldrick Redwine, Sione Takitaki, M.J. Stewart and Porter Gustin all had interceptions for the Browns defense, while Karl Joseph recovered a fumble for a touchdown on the games very first play.

For the Steelers, Ben Roethlisberger threw for 501 yards and 4 scores, but also tossed those 4 crucial and game changing interceptions. Big Ben has now thrown 28 interceptions in his postseason career.

With the victory, Cleveland advances to the division round of the NFL Playoffs where they will play the defending Super Bowl Champion Chiefs in Kansas City next Sunday at 3:05 PM. Jim Donovan and Doug Dieken will have the call for you on 1480 WHBC.