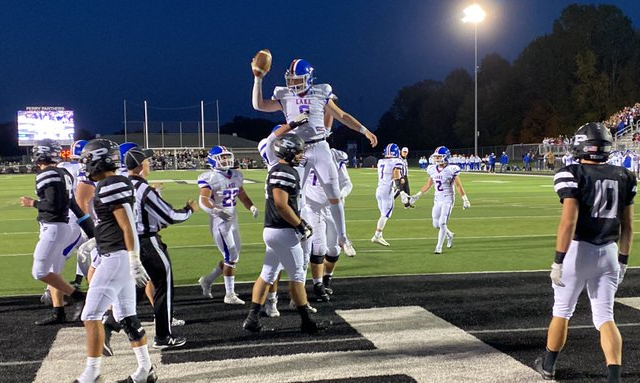 It’s hard to believe but week 9 of Stark County High School Football is in our rearview mirror and multiple teams created momentum for themselves as they prepare for the playoffs.

The Canton McKinley Bulldogs(5-4) have showed grit, toughness and a belief in themselves as they pulled up over a .500 record with their week 9 40-7 win over the GlenOak Golden Eagles(3-6). The Bulldogs depended on senior wide receiver Cynceir McNeil and he delivered in a big way. McNeil only caught 4 passes but put up 191 yards and two touchdowns. The Canton McKinley Bulldogs now own at least half of the 2022 Federal League championship and if the Green Bulldogs(4-5) can upset the Lake Blue Streaks(8-1) on Friday, McKinley will find themselves on top of the pile by themselves.

Late season quarterback changes aren’t usual but for the Jackson Polar Bears(5-4) making the move to freshman Lucan Ecremente paid off with a 21-14 over the Canton Central Catholic Crusaders(5-4). Jackson was able to rely on running back Jason Davide who picked up 154 yards and two touchdowns on 28 carries. The Polar Bears host the Hoover Vikings(6-3) on Friday.

There was lots of free football at Louisville Leopards(3-6) Stadium this past Friday night when the Leopards needed two overtimes to pick up a win against the Notre Dame Cathedral Latin Lions(2-7). This was the Leopards first overtime win at home since 1996.

Federal League representing in the playoffs

Plenty of people have opinions on if there are too many teams in the expanded OHSAA playoffs but opinions aside, the Federal League is on pace to send all 7 teams to the second season. This has to be considered a huge success for all of the teams and people who have put forth the effort to establish the Fed as a premier conference.

PAC7 is up in the air

It’s been a crazy year in the PAC7 and at this point, it might just be getting started. If the Canton South Wildcats(6-3) can take down the Northwest Indians(7-2), it’s possible the PAC7 will have to be split 5 ways between Northwest, Canton South, Fairless Falcons(7-2) Orrville Red Riders(5-4) and CVCA Royals(6-3).